The Te Puke Bridge club was established in 1956 and early members fundraised to own and adapt its current-day premises at # 4 Queen Street, right behind Mitre 10.

Club days are held three days per week and include singles, paired and team events over the course of the February to November year. There are also four tournaments, one of which is our major charity event in August, and the tournaments are well subscribed, attracting both locals and players from distant clubs.

Beginner lessons are held over 12 weeks each year in early autumn and the $70 fee covers instruction and the first year’s membership subscription.

The club goes to considerable effort to foster a friendly style and new players are welcomed. Where possible they will place people needing partners.

Bridge is the most incredibly stimulating game I have ever played and believe me, I have tried most things. I was a firefighter for 22 years and having four days off a week allowed me to have many interests – golf, biking, walking, riding, scuba diving and travelling. In fact it was on a cruise that I was first introduced to bridge.
Contrary to popular opinion it is not a game full of ‘old biddies’ , you don’t have to have extreme intelligence and you don’t have to remember cards( that comes naturally with time). I would say that I am absolutely hooked because it is a game in which you never stop learning and it gives me all the excitement I need. 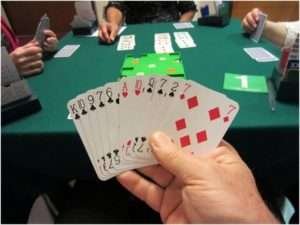 Beginner lessons are held over 12 weeks each year in early autumn.

Next Beginner Lessons:
Start May 6th evening & May 7th daytime

For further details of all club activities, please visit our website