Maybe you’d like to discuss philosophy or science, go walking with others, or have a go at photography or crochet?

The reasons for lifelong learning are compelling and as a growing body of research shows, both mental and physical fitness are crucial to wellbeing as the body ages.

Neuroscience research is continually revealing that building cognitive reserve is beneficial to maintaining mental alertness and to decreasing one’s risk of developing Alzheimers.

The University of the Third Age is an international movement dedicated to lifelong learning and gives participants a chance to pursue interests in the company of others.

The movement, known as U3A, is flourishing in the Bay of Plenty among people in the “third age” – the stage of life after the first age of childhood and the second age of full-time work and parental responsibility.

The Tauranga branch now has more than 800 members and about 100 groups. 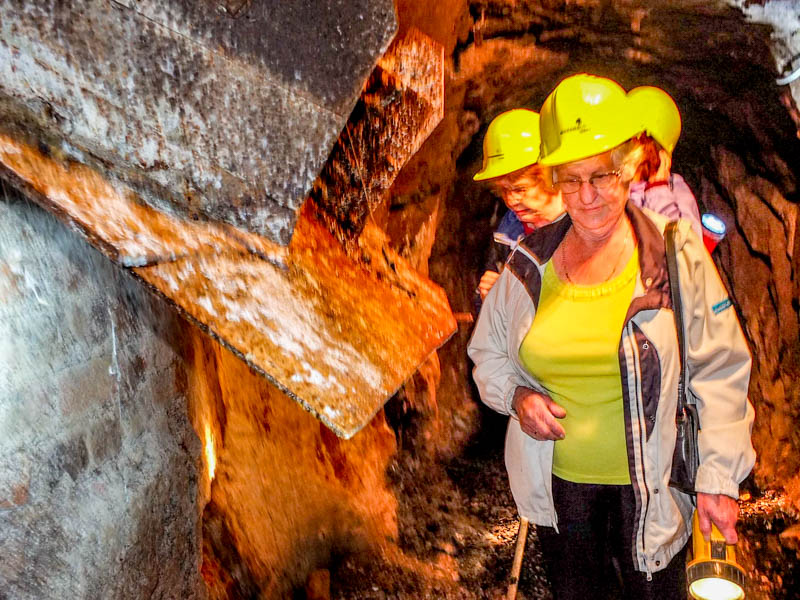 Members visiting the bottom of a kiln opening at Waihi.

“We try and get a cross-section of speakers, people who have had interesting lives, who have lived around the world, travelled, or have worked in interesting jobs, and we like a balance of genders.”

Joan says U3A has grown rapidly in the Bay, fuelled by the number of people moving to the region from other places, particularly Auckland.

“It’s a wonderful thing if you don’t know anybody and you want to make friends.”

Joan, 75, says the fact many groups meet in people’s homes makes them personal. “It’s a lovely way to get a close acquaintanceship.”

Joan and her husband work as relief motel managers and often travel out of town so she is not able to attend as many groups as she would like.

In the past, she belonged to an “acting for fun” group which she loved and still manages to attend an art history discussion.

She says everyone takes a turn selecting a painter of note “or not, as the case may be”, and discusses the artist’s life and works.

“It’s fascinating. It expands your horizons [because] let’s face it, you never stop learning in your life, and you really are better if you keep learning. You’re a much more interesting person.”

Joan says “the third age is that last block of life when people have got more time to pursue things they really wish they could’ve done”.

“They can follow their passions – it’s really lovely – and meet likeminded people.”

Angela Dold is a former Aucklander and met Joan through U3A.

Angela, 72, joined the movement after moving to the Bay in 2008 and is now convener of two creative writing groups.

“Learning is lifelong,” she says. “It doesn’t stop because you retire.”

Angela has been a widow 22 years and says being on your own is even more reason to embrace U3A.

“You have to be proactive when you’re on your own. There is no need to be lonely.”

She was also diagnosed with lung cancer three years ago, needing to have part of her lung removed, and says the experience has made her aware of life and the importance of pursuing interests and passions.

“Learning new things is how your stay on top of the world. It’s important to keep yourself busy,” Angela says.

Peter Bell is convener of a psychology group and says participants always have a lot of laughs.

The 81-year-old had a career in pharmaceutical and orthopaedic sales, at one time selling replacement knee and hip joints to surgeons, and did a course in psychology when he lived in Auckland.

“I’m not a failed doctor or a frustrated doctor, it’s just of interest to me. It has always intrigued me why people do the things they do.”

The Neurological Foundation of New Zealand says the old adage of “use it or lose it” is true not only when exercising the muscles of the body, but also the brain.

“Neuroscience research is continually revealing that building cognitive reserve is beneficial to maintaining mental alertness and to decreasing one’s risk of developing Alzheimer’s,” the foundation says.

“A lifestyle that includes stimulating mental activity, especially in the context of social interaction, is clearly correlated with healthy brain ageing and has been a consistent finding from large, well-designed studies of older adults.”

Bay social gerontologist Carole Gordon is a champion of lifelong learning and says movements such as U3A help give meaning and purpose as life expectancy increases.

“Sharing in groups years of knowledge and wisdom among people who have an interest is a wonderful way to stay engaged.”

Carole, who completed a degree in social science in her sixties, would also like to see more opportunity for lifelong learning at tertiary institutions and says technology can help people achieve entrepreneurial or creative dreams later in life.

“We’re living in a great era where people can continue to learn.” Check out the local U3A website for info on all the groups that operate

U3A began in France in the 1960s as continuing education for retired people.

Lectures were held at the University of Toulouse, but it quickly evolved to become less formal learning, groups now meeting in places such as homes and cafes, and members learning from one another.

U3A aims to give people in the third age – the stage of life after full-time work – opportunities to keep their minds active and expand their knowledge.

“Never too old to learn” is the motto associated with U3A and the organization is flourishing. In Rotorua, U3A has more than 300 members and almost 30 groups, including Pacific Studies, a Grey Warblers choral group, and Knitting and Crochet Enthusiasts.

Those with a passion for food have created an ethnic dining group.

Peter Wood is president of U3A Rotorua and says the organisation is enjoying its highest membership yet.

It has grown to 320 members and he says always welcomes more.

“It’s a great opportunity to keep your mind active once you retire and meet interesting people who have a similar attitude to life.”

Peter is a retired geologist who spent his career working in volcanology and geothermal exploration for Crown instiutes.

Now in his mid 70s, he convenes Rotorua U3A’s philosophy group and is also a member of the Pacific Studies and walking groups.

The Pacific Studies group has discussed topics including Polynesian colonisation of the Pacific, while the walking group takes walks in the countryside up to 2.5 hours long.

The walks happen within a 20 minute drive of Rotorua and Peter says they vary in difficulty, the easier ones on the 2nd Friday of each month and the harder ones on the 4th.

In his philosophy group, Peter says they tackle topics such as euthanasia in their meetings, which also happen bi-monthly.

“It’s practical philosophy of life stuff rather than dealing with old philosophers such as Aristotle. The idea of the philosophy group is to make people think.”

Membership to U3A Rotorua is $10 per year and bi-monthly members’ meetings are held in the bridge club rooms at Neil Hunt Park on Tarawera Rd.

There is also a U3A community forum, which is open to the public.

Waikato University law professor Alexander Gillespie is scheduled to speak at the next forum on November 16 about terrorism and the potential implications for New Zealand in the wake of this month’s American presidential election.